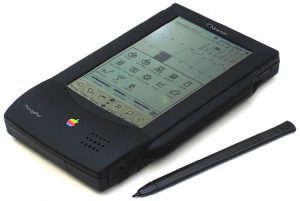 The first PocketMoney was created by Hardy Macia in 1994 when it was released for the first Apple handheld: the Apple Newton, and since then, acclaimed by users and professional reviewers (MacWorld, MacUser and Pen Computing Magazine) worldwide, which appreciated the existence of a software which, at that time, was relegated to a desktop only experience. The desktop version followed, and competed with two industry giants (Microsoft Money and Quicken), for several years.

In 2008, PocketMoney achieved further success with its release on the newly created Apple App Store. The app was released for the iPhone and then iPad and Mac, other than Android, Windows, Linux, Palm and Windows CE. With over 2.5 million views every year, 1 million downloads and about ¼ of a million users worldwide, the app is one of the most viewed and downloaded financial apps on Apple App store.
In 2013, following the death of Hardy Macia, there was a stop to the development of the software, which restarted in 2016, when a couple of investors, and former enthusiastic users, bought the company aiming at using PocketMoney as starting point for the development of a financial ecosystem.
In 2017 one of the investors, an Italian Wealth Manager working in one of the European FinTech capital: Zürich (Switzerland), has taken over the project aiming at leveraging his experience to move forward with the development of the new platform.

In 2019 PocketMoney GmbH is incorporated in Switzerland, and a totally renewed PocketMoney is launched the 18th of December, moving from a pay to use to a Free to use ad-supported business model, with in app subscriptions to unlock more advanced features.